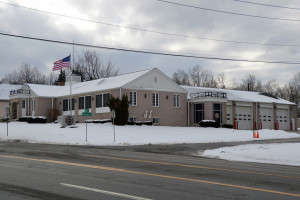 Windom Volunteer Fire Company, at Abbott Road and Olympic Avenue in Orchard Park, stands on a site that once held an old school house.  The current building is an addition to that building.

The fire company, formed in 1928, used to hold meetings in the school house while the apparatus was parked in a garage across the street.  The fire company bought the land in 1936 for $50.00, and the first of many additions was built the following year as a Federal Public Works Administration project.  A second bay was added in 1953 to the one-bay cement block fire hall.  Use of the two bays that were on the front was discontinued when the three new bays were added on the Olympic Avenue side in 1968.  Another two bays were added in 1977 and new brick work was completed in 1999.

The Windom Fire Company provides Fire and EMS services in the “Northwest  Section” of Orchard Park, which include residences, commercial and industrial developments, part of the State Rt 219 highway, and New Era Field(home of the NFL’s Buffalo Bills). Events at the stadium may include over 73,000 spectators, which brings members to the hall for long-term stand-by as service the people attending. The Buffalo Bills are the only professional sport team to have a volunteer organization such as ours protecting its grounds.

Serving and Protecting the community since 1928